What I learned about Software Development from building a Climbing Wall 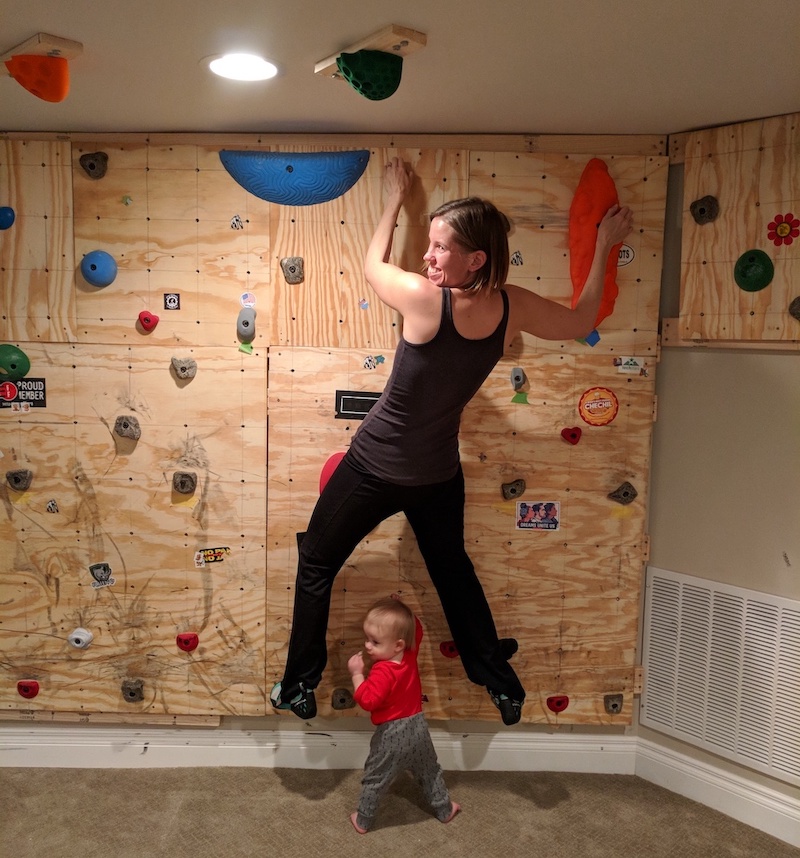 Theo liked to imitate as he was learning to walk.

I didn’t really learn about programming, this is just a catchy title, and I wanted to share a big project I have continued to work on that has nothing to do with programming. I thought I could make a kind of funny post by stringing together a bunch of programming ‘wisdom’ that could really be associated with nearly anything.

Climbing Wall: If you aren’t sure how much you will use the wall, or how much effort you want to put into it you can start small. Build and expand over time.

Software: In software, most of the time these days folks take an agile / lean approach and try to deliver working MVPs along the life of the project to deliver continuous value and learning.

I started really small, initially with a training board. I installed this above the stairs entering the basement.

A training board lets you strengthen your fingers, and do weird pull-ups

I then added a few holds directly into the wall near the original board so I could string together a few moves. 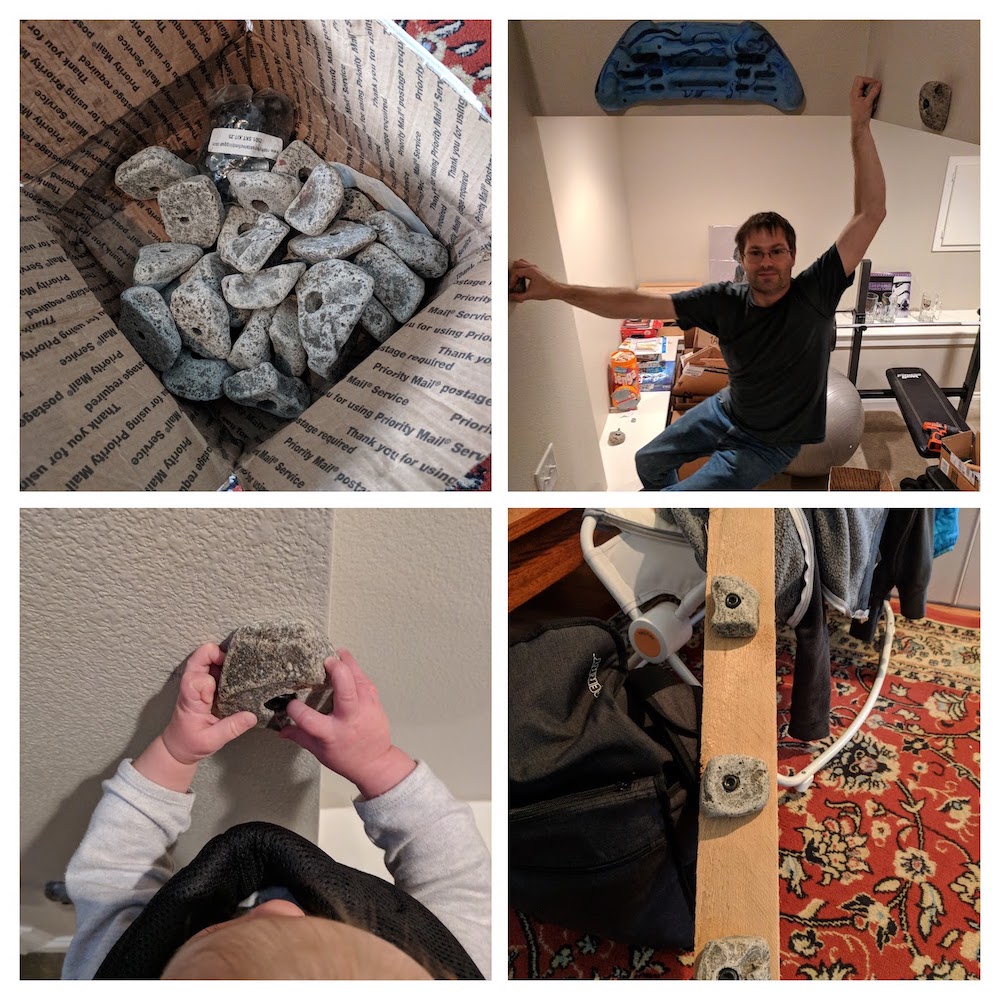 A first box of bulk climbing holds, a test mounting on a board

Then I added a single set of boards on the wall… and started to expand out from there. 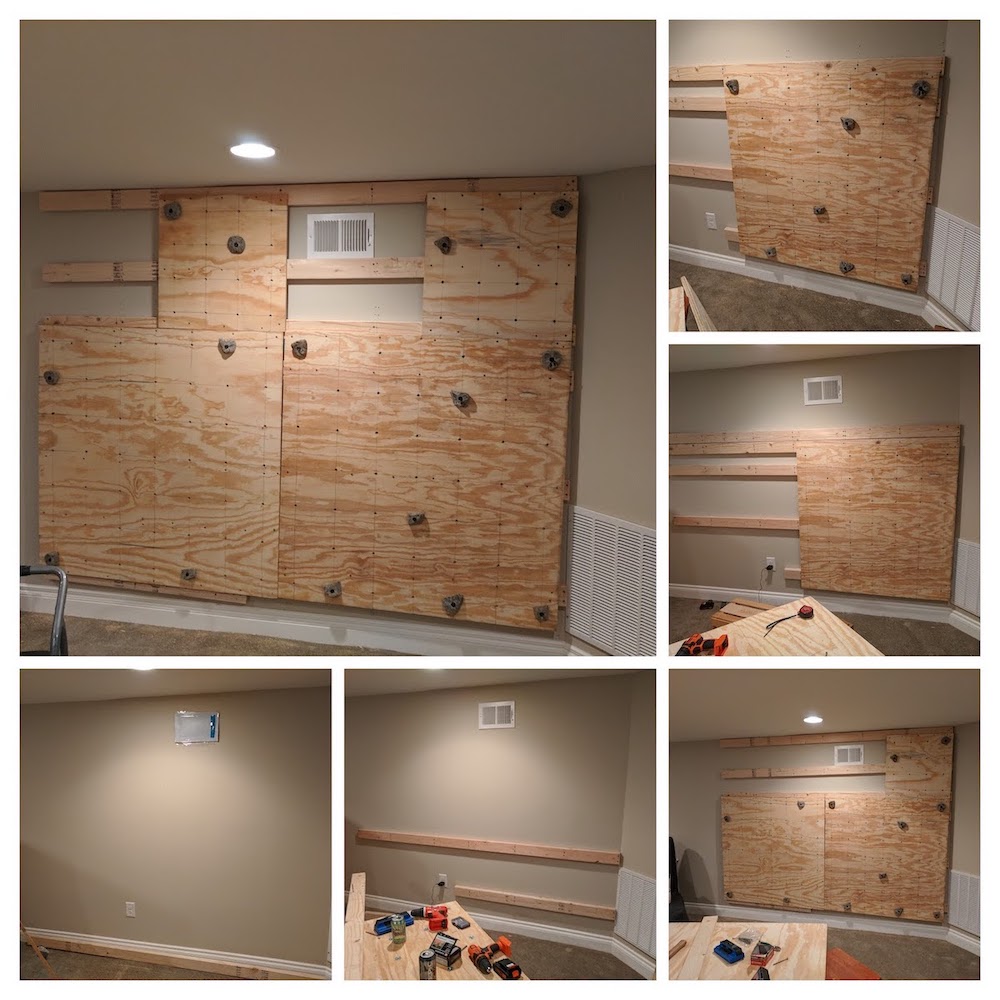 empty wall, mounts, one board, and more

Negotiate with the Team

Climbing Wall: I did have to discuss everything with my wife before I started drilling a bunch of holes in our wall. This was a bit of a process, starting with the training board, the wall holes (and an agreement that I would patch any holes… hmm I still have to do some of those. A discussion that became easy as she found she enjoyed adding frequent climbing into her exercise routine as much as I did.

Software: In software you are always working with stakeholders, PMs, designers, other developers, and hopefully directly with some customers. Nearly everything built requires negotiation and compromises on time, features, UX, etc. 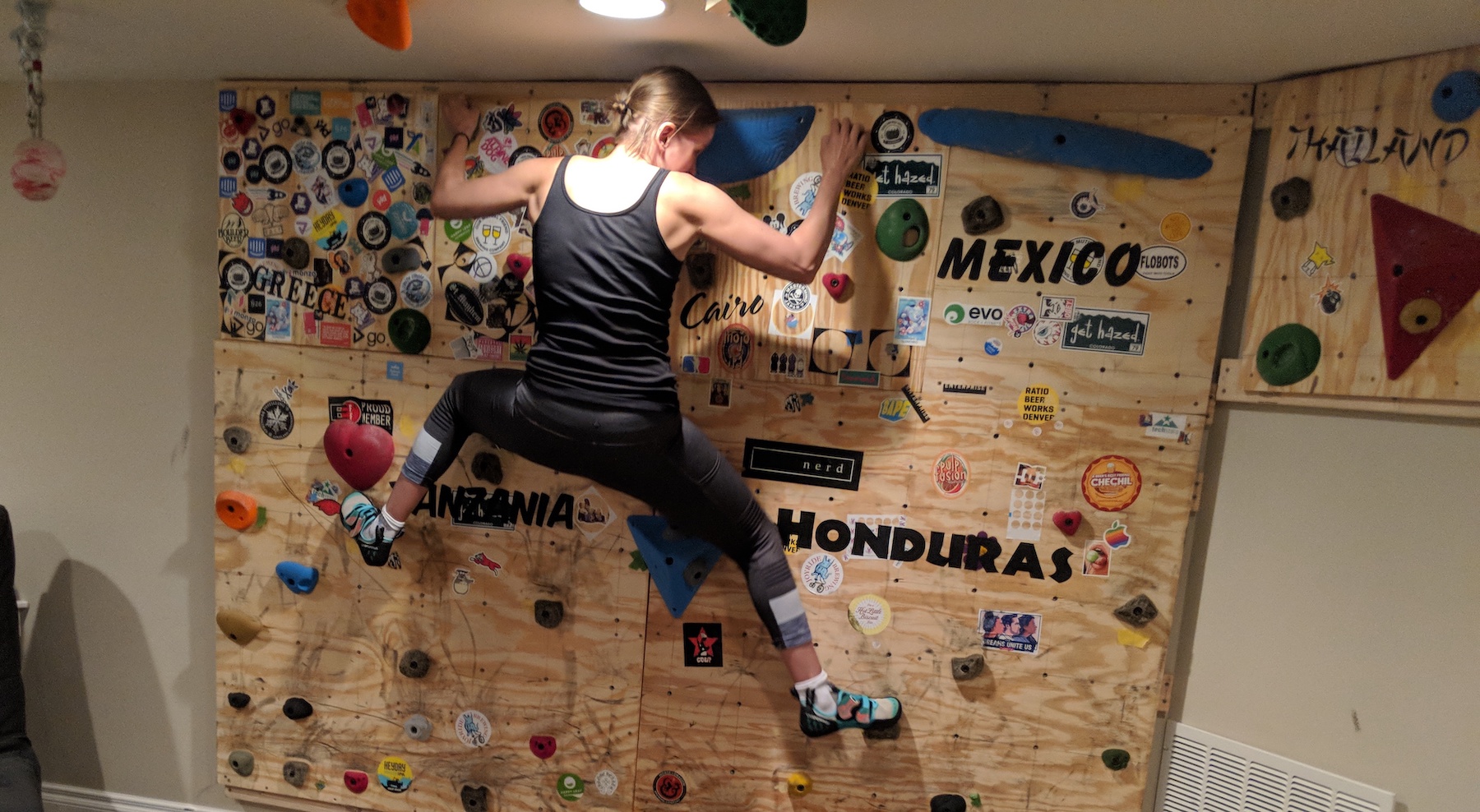 negotiation with my partner

It Starts with A Plan

Initially, I started with just a small idea, but it expanded out, especially after my wife decided she also really enjoyed climbing on the wall as well. 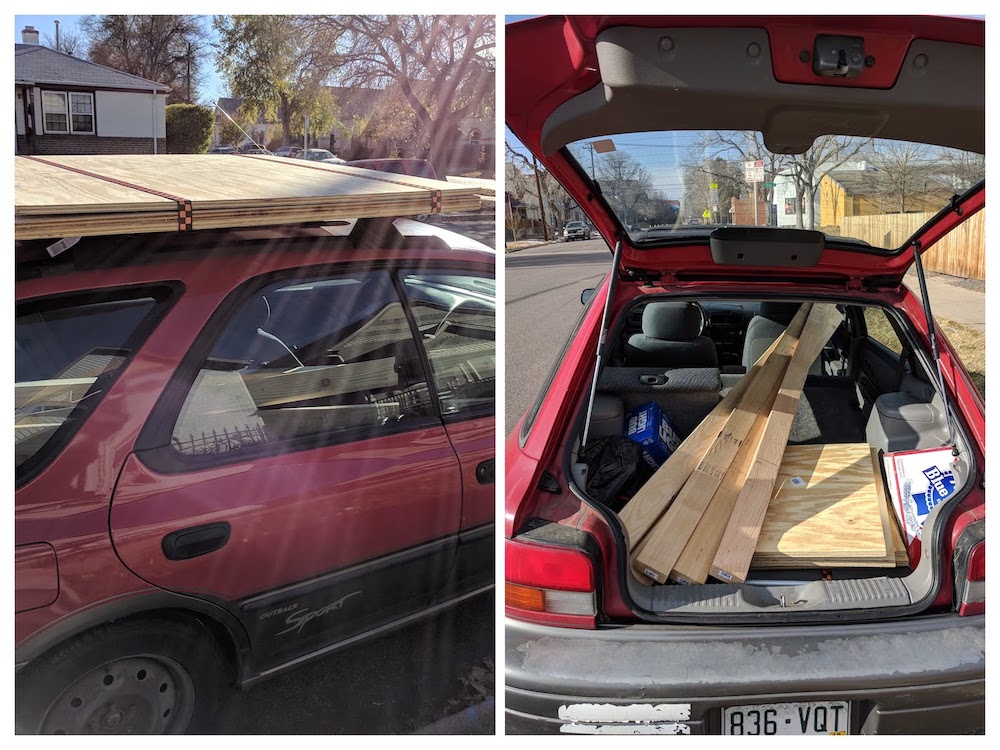 Ensure Your Project has a Reasonable Learning Curve

Climbing Wall: On a climbing wall you want it to be fun for beginners, kids, and more experienced climbers. Just like in software you want a project to be accessible and learnable by new hires and developers of different skill levels.

Our wall was a big hit with so many kids, I have added a lot of easier holds and built a lower route so small children can jump on the wall and have a great time.

Software: You can’t build a team, recruit, and mentor folks if you have a software project that is all expert level. Ensure it is easy to set up the apps development environment and it is easy to add features, test, and deploy safely so new folks can learn with confidence. 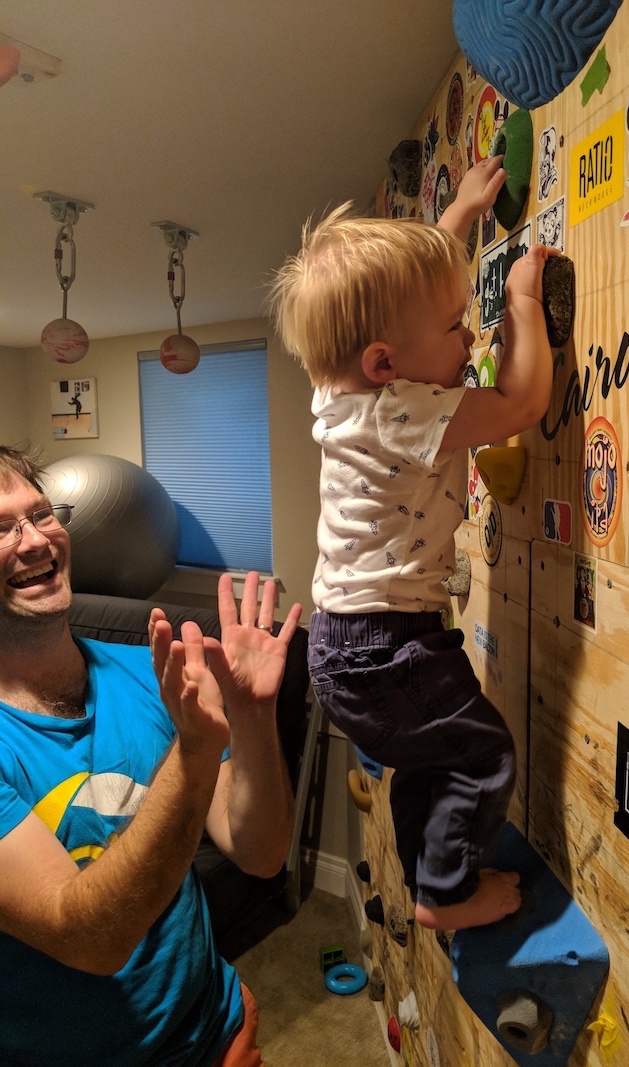 On personal projects as in software, you want to set short, medium, & long term goals. 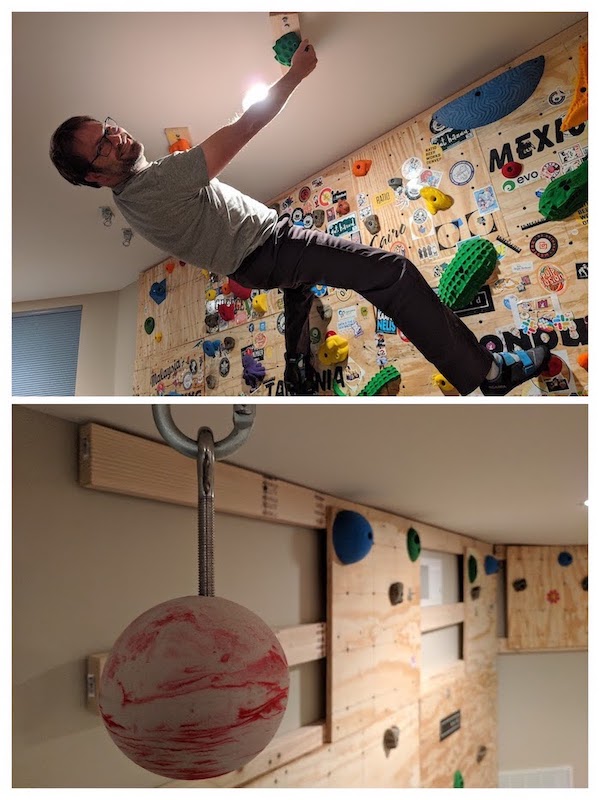 Climbing Wall: In general, whenever I expanded the climbing wall, I would quickly add some holds and celebrate by climbing my new longer route.

Software: Your team should be proud and get to celebrate after shipping something big. Also, ensure developers are sharing the things they learned along the release with the team. Having space to make investments and to pay down debt, requires that everything can’t always be moving at maximum speed all the time. Celebrate the progress folks are making.

Climbing the Routes as the wall is in progress 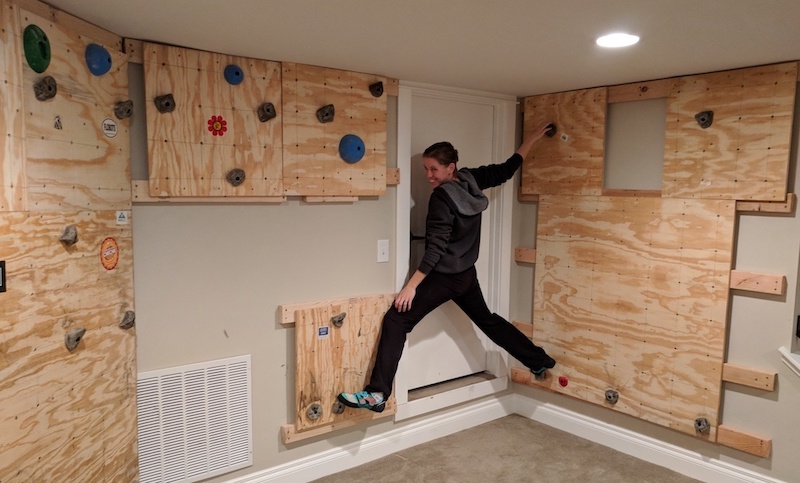 Climbing Wall: On the wall, I would build and leave space to add more when I had the time.

Software: In software, you want code that is flexible and easy to adapt. This doesn’t mean to over optimize, but know when to be specific and when to offer flexibility (the rule or threes can help with this). 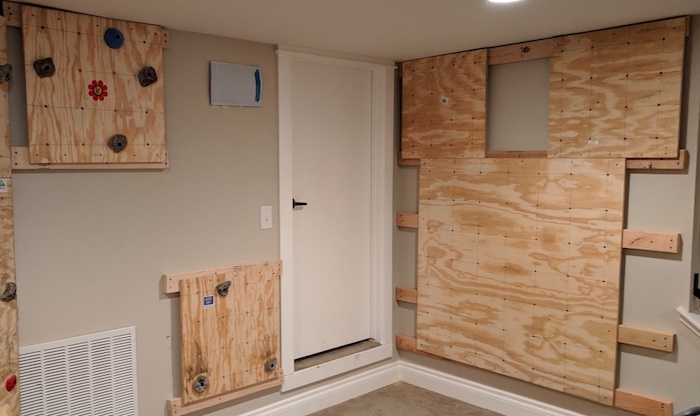 Gaps When, low on Supplies

Make it work, make it right, make it fast

Climbing Wall: The wall was built to keep up and extend my skill level… When I didn’t have the parts or the time, I would sometimes make something fast and leave gaps to extend the routes.

Software: In software, make sure you can get it working, this ensures you solve the hard problems. Then make it right soft the edge cases and the gotchas. Then make it fast and scalable. 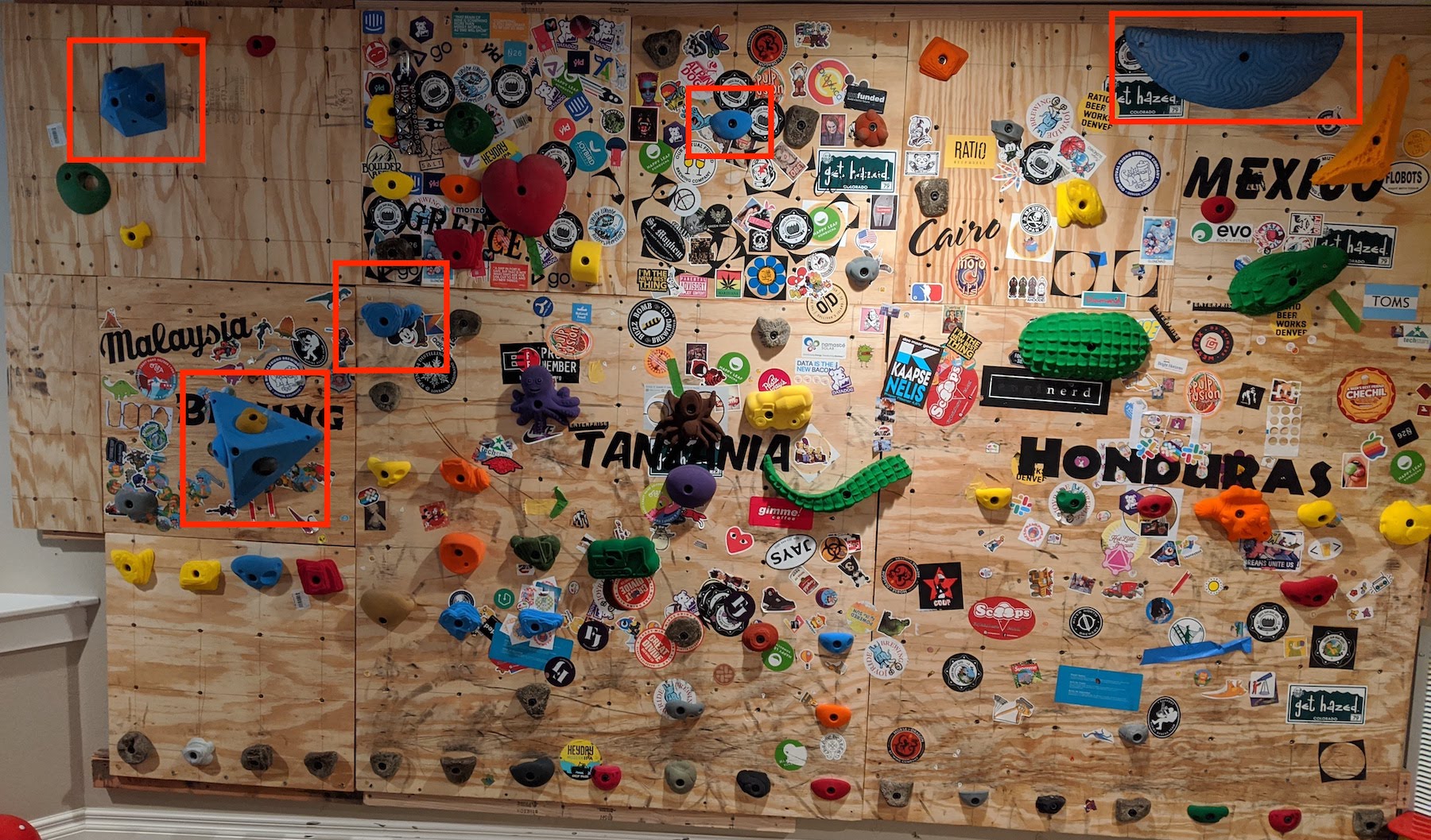 Climbing Wall: As I worked on the wall project I became better with tools, building, designing routes, & more. I got comfortable and started to think up some more complex projects.

Software: Software takes practice, you will get better the more you build things. Learning which practices to follow and which don’t scale well.

You Can Learn Anything

Climbing Wall: I seriously know very little about building things, tools, construction, or really even climbing. All the information you need is available online to learn so much about any topic that interests you.

Software: You are always learning in software. A new framework, language, domain, etc… The field changes so fast that you have to keep learning to stay up to date. To know when something is a fad or is really worth investing time in deep learning.

You Get Better with Practice

Climbing Wall: Originally, I barely knew what size drill bits, bolts, nuts, and holds… Now I can put all this together and set up a new board in almost no time at all.

Software: It is good to keep practicing… Often this is how you learn to navigate all the grey areas of programming. The best solution to a problem isn’t always black and white, often the best practices have edge cases… Learning what to bend and what to break comes with practice and experience. Feeling the pain of maintaining systems over time, knowing what will stick around and what code often just gets removed. 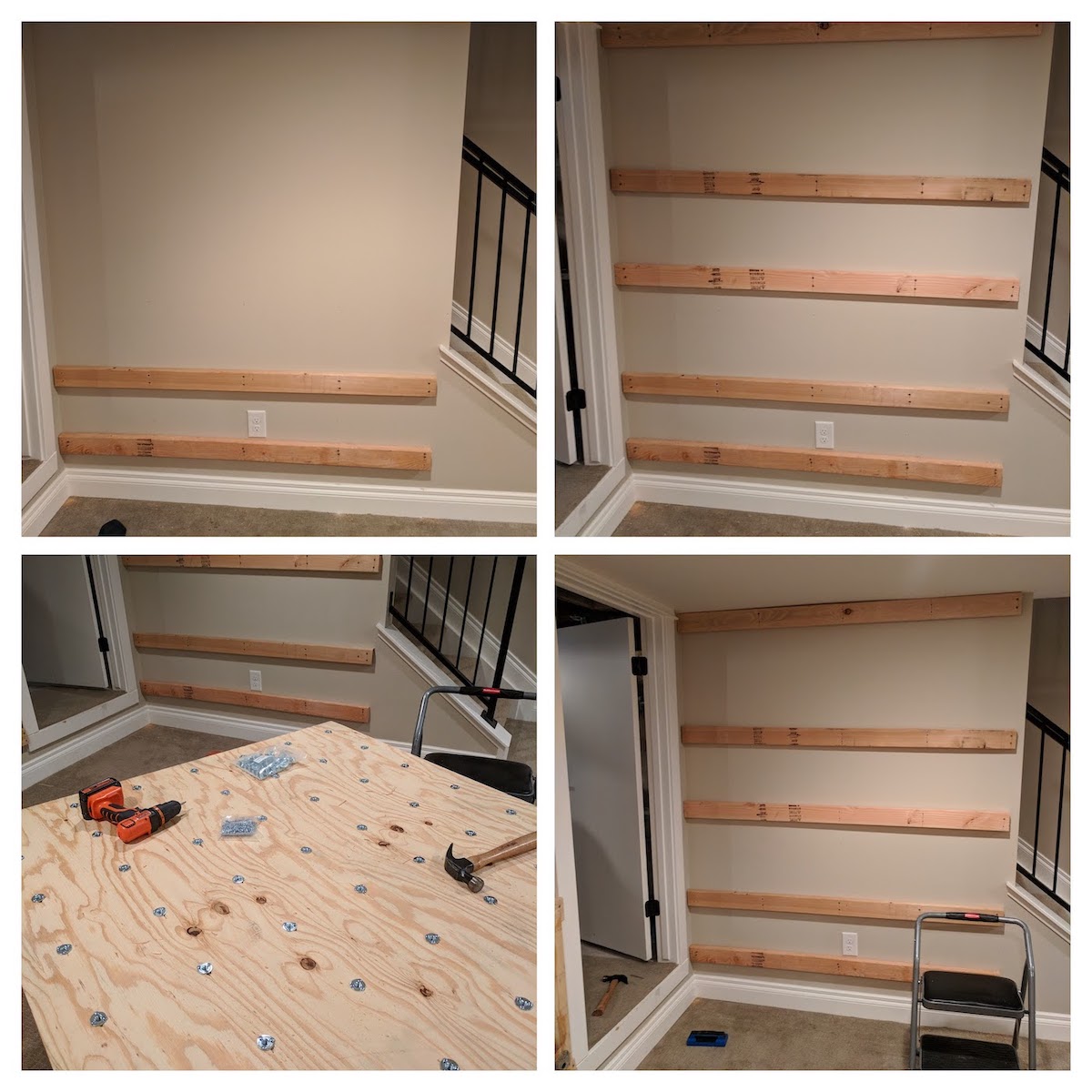 It Takes A Team

Climbing Wall: You can’t hold up 4x4 plywood and drill it in yourself… Building a climbing wall requires teamwork. Collaboration to successfully complete the project.

Software: In software, most projects can’t be done by a single developer anymore. It takes collaboration, coordination, and teamwork to build something that lasts.

A few of the friends who have helped out

Learn From Prior Art

Software: Not often are you building a program from scratch with no prior art. Learn from existing frameworks, applications, books, and open source. Build on the shoulders of giants as they say.

Climbing Wall: I started with some cheap holds, but over time I upgraded to nicer holds over time as I spent more time on the wall and as I expanded it. In the end, I really love atomik climbing holds, and I buy most of my equiptment there.

Software: In a software startup or a feature, you want to find the fastest and cheapest way to verify the value of something. When you know there is a value and have been able to build something sustianable (or I guess in startup world, with a hockey stick growth), you might want to move on from “it works” to it is best in class… Particularly, for things that aren’t part of the core company business value.